The Sisters of Saint Benedict Monastery, Taipei, Taiwan received a second novice who has taken the name Sister Gratia.  She was received  on December 7, 2018 joining Sister Benedicta in the novitiate

.  Both women are originally from Vietnam.

The BENEDICTINES in EAST AFRICA and OCEANIA (BEAO) gathered at Saint Benedict Monastery in Taipei, Taiwan November 26-30, 2018.  Representatives from monasteries of this geographical area gathered to discuss topics related to monastic life and their monasteries in this region.  Abbot Primate Gregory Polan participated as well as Brother Nicholas Koss of Wimmer Priory in Taiwan, a good friend of the Sisters of Taipei. 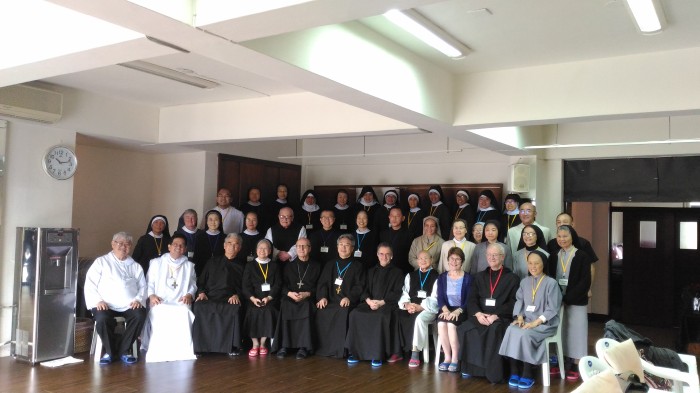 The Prioress of the monastic community is spiritual leader, guide and planner.  Each monastery elects a prioress through a discernment process and also determines the length and number of terms. Three monasteries of the Federation had elections this year.

The Sisters met in discernment February 24 and 25 facilitated by Sister Kerry O’Reilly, President of the Federation, and Sister Josue Behnen of Saint Benedict’s Monastery, St. Joseph, MN.  The canonical election was held February 26, 2016 and SISTER EMMANUEL HSIANG was elected to a second 6-year term.  She was blessed by the community, oblates and friends.  It was particularly festive with the presence of their Junior Sister, Sister Maria Sung, from their mission house.  The community celebrated with a festive meal and entertainment by the newest members of the community.

When visiting Taiwan the flight connects in Tokyo, Japan so a visit to the Sisters at Saint Benedict’s Monastery, Muroran, Japan was in order!

also had a re-election on April 3, 2016.  SISTER SANDRA BRUNENN was elected by her community to serve a second term of four years.  The Benedictine way is to take time for discernment – creating an atmosphere within the house and within the community members of quiet and deep listening.  Who is God calling to leadership at this time?  What are community members hearing?  What can they share about the Sisters raised up for consideration for leadership?  A Formal election takes place only after the community seems to develop a broad consensus.

Following two re-elections, Annunciation Monastery in Bismarck, ND elected SISTER NICOLE KUNZE to a first term of 4 years on April 9.  A community begins thinking about the future long before the election as it prepares Direction Statements.  The Sisters ask themselves what is our hope for the future and where is our energy for that future?  Where would we like to be four years from now?  As they discuss that and formulate general statements it becomes a basis for what kind of skills and gifts would be help move the statements to reality.

The position of prioress is challenging and can be overwhelming even as it has rewards.  Benedictine Prioresses from around the country meet once a year for sharing and support and quiet time together.  This year’s gathering was held in January at Our Lady of Grace Monastery, Beech Grove, Indiana.

Gathering of Professed Benedictines 55 and Under

One privilege of a Federation President is getting to know many Sisters from other Federations.  The Sisters from all the Federations and Congregation 55 years old and Under meet every three years and 2016 was one of those years.  The presidents are invited to attend and share thoughts.  It is a privilege.  The energy was high as Sisters recalled formation gatherings they shared, as the theme of Collaboration was explored by Sister Aileen Bankemper of St. Walburga Monastery, and time was given to explore Indianapolis, IN where our Lady of Grace Monastery, Beech Grove, is located.